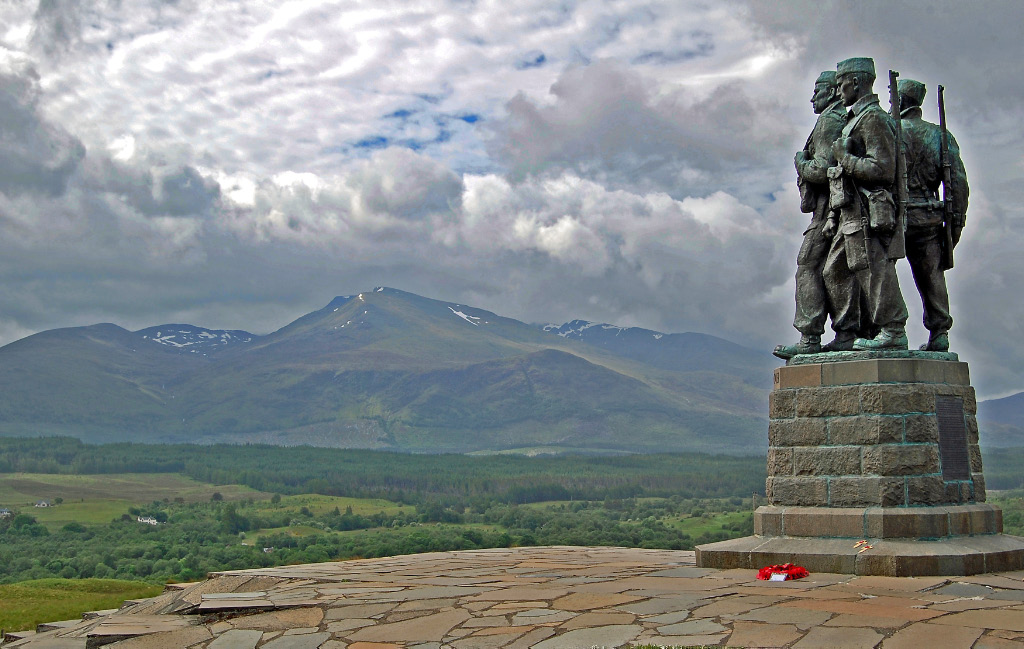 The gruelling race to ‘Castle Commando’

Some colleagues and I share an annual tradition. Every spring we go for a run together, but this one’s a bit different. It involves a 14-hour journey to one of the most beautiful parts of the UK. It’s open primarily to Her Majesty’s forces, both regular and reserves. And it’s one of the toughest races most of us will face all year.

It’s important to tell the story of the Commando Speed March because it’s a lesson in history and humility. It helps to remind us of the incredible sacrifices made by previous generations. It’s also an inspiration for anyone on their own fitness journey, showing what training, discipline and mental resilience can achieve.

The part of the country I’m talking about is the gorgeous Scottish Highlands. The last leg of our journey there takes in Loch Lomond, Rannoch Moor, the majesty of Glencoe and Ben Nevis. Sadly, our race doesn’t allow for much sightseeing. Instead, it means running with 36lbs (16.5kg) over seven miles in less than one hour. Along the way, it raises important funds for military veterans and their dependents.

Our route echoes the 1940s, when soldiers hoping to become commandos arrived at Spean Bridge railway station. Already weary from the journey, they’d load their bags onto trucks. In full kit with their heavy rifle, they were ordered to march to the training centre at Achnacarry Castle. If they didn’t get to ‘Castle Commando’ within an hour, they were sent back to their unit, ‘RTU’d’. It was a simple pass or fail.

In 1996, the charity event we now ‘enjoy’ was started by local resident Graeme Taylor, in memory of this arduous challenge and the men who gave it a go. In recent times, it’s attracted over 300 entrants a year, all of them focused on that magic one-hour deadline. The only way to do it is to run the whole way.

The start is savage, with a very steep climb just under a mile long. The sharp incline and switchback at halfway is very tricky. Through the gates, a final cheeky 200m climb and the finish is close. The winners are the team with the five fastest finishing times. But participation and giving your best is the spirit. As so often in life, getting started is more important than being the quickest.

We are drawn back each year by the event’s past, as the story of these commandos comes from dark days. After the evacuation at Dunkirk in May 1940, Britain was alone and vulnerable. Invasion from Nazi Germany was a real threat, and new Prime Minister Winston Churchill knew this very well. His famous speech promised:

Against this backdrop, and calling on his own military background, Churchill founded a new fighting force. They were inspired by the Boer Kommandos that Britain had fought 40 years earlier. They would work in small groups, trained for quick, destructive raids against the enemy.

As the unit grew, training moved to Achnacarry in 1942. On running through the gates, soldiers would see a row of graves alongside the driveway. Each featured a short description – including rank, name, and cause of death. “He showed himself on the skyline”, said one. “He failed to take cover in an assault landing”, said another.

The regime was innovative and taught skills from demolition and boat handling to survival, escape and evasion. Lt Col Fairbairn and Major Sykes coached special techniques in unarmed combat. They had developed ‘defendu’ (gutter fighting) when policing Shanghai – then one of the most dangerous cities in the world. Their design for a new fighting knife became the commando symbol we recognise on uniforms today.

By the end of the war over 25,000 soldiers had passed through ‘Castle Commando’. They inspired the creation of the Parachute regiment, and the Long Range Desert Group (who became the SAS). During the 1940s, and in contravention of the Articles of War, those captured were denied prisoner-of-war status and executed without trial.

Born out of national weakness, this unique group went on to win heroic status. As Churchill said, “War is not won by evacuations, but there is a victory inside this deliverance which should be noted.” Even the defeat of Dunkirk led to a cutting-edge idea that helped the Allies to victory. It’s the same in our personal lives. Sometimes it takes a bad situation to find a solution we’ve been looking for.

The Commando Speed March isn’t open to the public. But you can still follow the original route on foot or by car, starting at the railway station. Don’t miss out the Spean Bridge Hotel, a ‘watering hole’ for commandos past and present. It houses a world-class collection of WWII commando memorabilia in a small museum.

Over a mile from Spean Bridge, on a prominent hill, stands the impressive Commando Memorial. It depicts three commandos facing Ben Nevis, overlooking the area where their training would have taken place. We always stop here during our trip, as an act of remembrance. The bronze memorial is dedicated to those original commandos of the Second World War. As we take in the fresh mountain air, we read the words on the plinth, ‘United We Conquer’.

To learn more about the commandos, and how to support our veterans:

This article is dedicated to former Squadron Sergeant Major WO2 Al Stewart 131 Commando RE, 1963-2019.