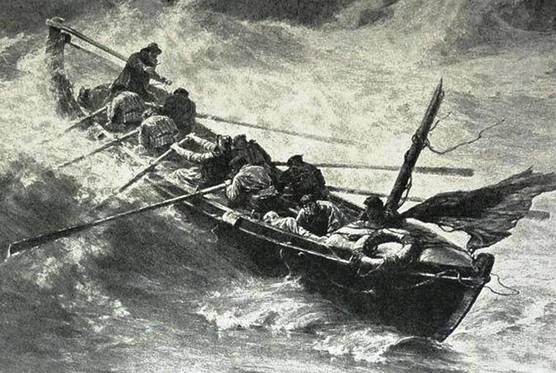 I’ve often written about individuals – people who have faced tough lives and shown great resilience. But whole communities can be heroic, too. Think of the little ships of Dunkirk, rescuing thousands of men from the beaches of northern France in 1940. Or the countless examples of neighbourliness during our own coronavirus crisis. When communities come together, good things happen.

I learnt about one of them when visiting the North Yorkshire coast around Robin Hood’s Bay. These days the village is a popular beauty spot, often busy with tourists. With Whitby close by and a National Park to the west, it has a rich history to discover. The clifftop walks are wonderful, and it’s a dramatic and isolated place. Even on a sunny day, it’s easy to imagine a big storm rolling in from the North Sea.

That’s just what happened in the winter of 1881, one of the worst England has ever seen. In January, a blizzard paralysed the country. Roads and railways were blocked by snowdrifts, often dozens of feet high. Then there was the extreme cold, with temperatures as low as -30C in some places.

In the early hours and darkness of January 19th a local ship, Visitor, was struggling in severe weather off the North Yorkshire coast. She broke up in the storm, forcing the terrified crew to their tiny lifeboat. They battled the mountainous sea, biting cold and blizzard conditions. The treacherous surf and rocks stopped them from landing, so they were stuck offshore.

With daybreak, the six crew were spotted. But local fishermen could not set out in such a wild sea, and the village’s own lifeboat had seen better days. A telegram was sent to the harbourmaster in the nearest town: “Vessel sunk, crew riding in open boat by wreck, send Whitby lifeboat if practicable.” Prevailing winds made this impossible. So it was decided to carry the lifeboat Robert Whitworth overland to reach the desperate crew in Robin Hood’s Bay.

In the 1880s, horsepower meant exactly that. There would be no motor vehicles or electric winches to help cover the six miles through the blizzard. Everything would rely on old-fashioned muscle power and word of mouth.

Up on its carriage, the lifeboat was coaxed up steep hills and through seven-foot snowdrifts. An army of over 200 volunteers worked to clear its way, with their sweat freezing whenever they stopped. Even with a team of powerful horses, it must have seemed hopeless. They met people coming the other way, urging them to turn back from their impossible task.

Yet the men, women and children of Whitby wouldn’t give up. Farmers turned out with horses and shovels. They were helped by others who cleared the path from the Robin Hood’s Bay side. Narrow lanes meant that garden walls and bushes had to go to make way for the lifeboat carriage.

Word had spread and a huge cheer was heard when they reached the steep hill down to the sea. It had taken just two hours. Now they had to steer the boat down the tight winding streets of the fishing village. Instead of hauling, they had to hold the boat back. If it broke free on the icy cobbles, it would be a disaster. But they succeeded and soon the lifeboat carriage was crunching over the shingle, pointing at the wall of surf.

The first rescue attempt failed, as several oars were snapped in the rough seas. So the coxswain returned the lifeboat to the beach. He launched again, with fresh crew and new oars, two men on each. This time they saved the stranded men, who were numb with exposure and must have given up all hope. Landing on the beach was overwhelming, with a huge crowd gathered to celebrate the good news. It had been a miraculous rescue.

One local man’s story is remarkable, and his name now appears on a plaque above the village. Henry Freeman was the coxswain in charge of the lifeboat. Twenty years before, almost to the day, he had been the sole survivor of another rescue. Several lifeboatmen had lost their lives helping to rescue people from five vessels in one day. Freeman was awarded the Silver medal from the RNLI, the national lifeboat charity.

Brave heroes like Henry Freeman are often the ones who get remembered in museums and memorials. But the Robin Hood’s Bay rescue involved hundreds of men, women and children. They all did their bit. They cleared the snow and hauled the icy ropes so that six strangers could be saved. Together they achieved one of the greatest rescues in the history of the RNLI.

I find it interesting that such stories are so memorable. They clearly reach something ancient and deep-seated in all of us – an instinct to work together with a common purpose. With the pressures of modern life, it’s understandable that people feel alone and overwhelmed. Self-induced pressure can add to this sense of isolation. As we consider the positive New Year changes we wish to start, remember that shared goals can be just as rewarding and powerful as individual ones.

Find out more – the RNLI:

The story of the Visitor shows the incredible efforts that coastal communities made to save those in distress at sea. But our coastline is steeped in countless brave sea rescues, with voluntary crews leading the way. The lifeboat charity was founded in 1824 by Sir William Hillary. Living on the Isle of Man, he felt compelled to do something about the number of ships being wrecked around the coast. After years of lobbying, he won support for the idea of lifeboat stations we know today. A few years after his death, those first RNLI lifeboats were stationed at Douglas, in his honour. “With courage,” he had said, “nothing is impossible.”

Video: the origin of the Royal National Lifeboat Institution